Danio Wu was born in Changsha, Hunan Province in 1983, and had an inclination towards woodworking from the start as a result of his father’s career as a woodworker. After graduated from school, he worked for his father’s business. He met a violin teacher who shared with him the history of violin making and he became immediately attracted to the craft. In 2004, after talking with his teacher he decided to come to Guangzhou, which is considered the Town of Music. He was introduced to Mr. He Guanghong and began to learning violin making as an apprentice. Mr. He is the golden award winner of the second China National Violin Making Competition and the Outstanding Violin Maker of Guangdong.

Wu’s violin making improved enormously after being tutored by the master Mr. Chan Zhenwu, who was recognized as the Outstanding Violin Maker of Taiwan. After years of careful study, he finished his first violin in 2006. Soon after, this master violin was sold in America and has been praised for it’s superior tone and quality. Now his master-made violins are accepted by many domestic and international professionals and amateur violinists alike. The main features of his handmade violins are their wonderful timbre and strong penetrating power.

In 2014-2016, as he developed his career and craft, Wu’s handmade violins have became very popular in America and Europe. Wu also excels at restoring and repairing valuable, older violin. In the past few year, he has restored several treasured violins for players locally and internationally. 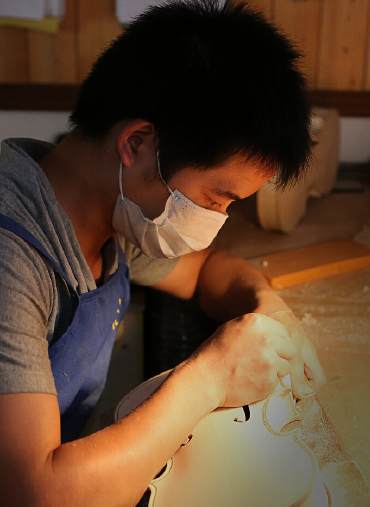