Lelio Pan was born and raised in the small village of Qinzhou, Guangxi Province, China. He loved making music through singing and using found objects as instruments at a very young age. He would use leaves and wood pieces to make notes and sounds. In 2005, he graduated from school and decided to pursue a career as an instrument making.

In 2006, he was quite taken with the voice of the violin after visiting Music Guangzhou. At that time, he met Mr. He Guanghong and decided to learning violin making. Mr. He is the golden award winner of the second China National Violin Making Competition and the Outstanding Violin Maker of Guangdong.

Pan was extremely diligent in his study and learned his craft very quickly. His handmade violins are praised by Mr. He En. In 2010, he finished making his first violin and sold the instrument to a famous Europe violin player. After Mr. He En passed away, he was not sure that he could continue in violin making. Despite his discouragement, he continued his study under the supervision of Mr. Lizhijie, a leading violin paint expert in China and was also mentored by Mr. Chen Weibiao, another Outstanding Violin Maker. Now Pan’s violins sound beautiful and magnificent and have became very popular with violinists in America, Europe, and Asia. 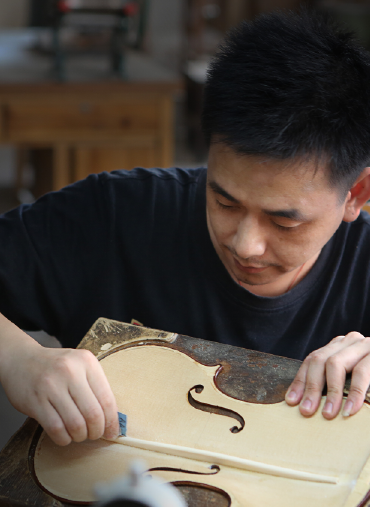