Marco Jian was born in Yulin, Guangxi Province in 1983. He loved wooden instrument as a child and was always curious about folk instruments. As a hobby, he would take them apart to figure out how the voice worked. He had dreams of making splendid instruments. In 2002, he left his hometown and ran after his dream.

In the beginning, he worked for a guitar company and learned how to construct guitars. He was very talented and won a place in the set up department. In 2004, after assisting an orchestra with their guitar setup he was attracted by the violin melody “Butterfly Lovers.” “That is the voice I hear in my mind,” he said. Marco quit his job and pursued violin making.

He bought many books about violin making and was soon introduced to the outstanding Violin Maker of Guangdong, Mr. He. As a result of his enthusiasm, he was recognized by Mr. He and became his studio apprentice. He was grateful for the opportunity and put his heart and soul into his study. It seems that he was different from everyone else in how he thought independently and had new and different ideas. Jian’s violins seem to be more powerful that his imagination. Mr. He later introduced him to Mr. Li Zhijie, the most revered violin painter in China and Mr. He En, another outstanding Violin Maker of Guangdong.

Jian has become a very sought after violin maker and many famous violinists now invite him to adjust their instruments, fitting, change the bridge and sound posts. Between 2007-2014, his master violins became a fixture in the homes of professional violinist in China and abroad. From 2014 till now, Jian has taken his outstanding violin making abroad to a new level working with makers worldwide. 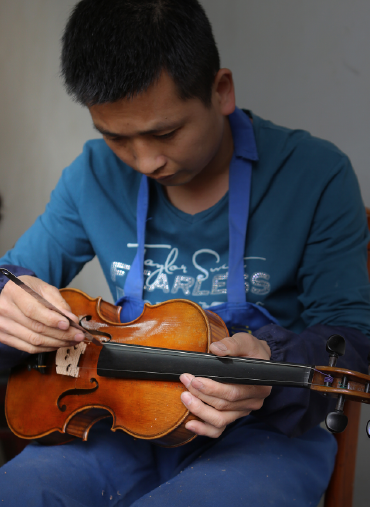